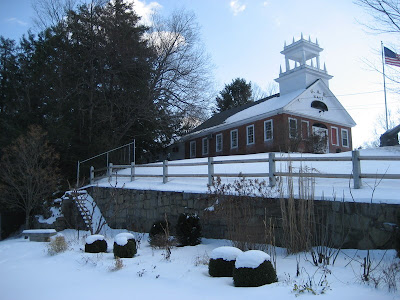 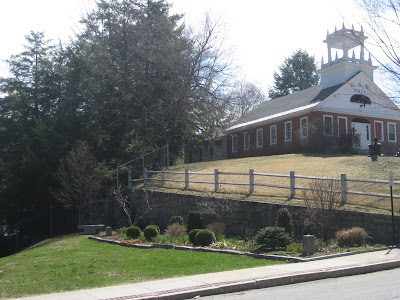 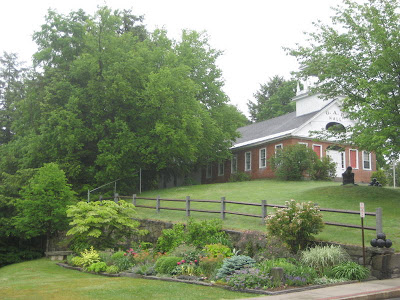 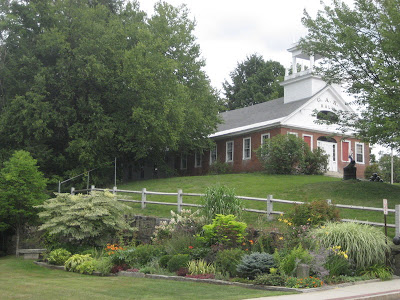 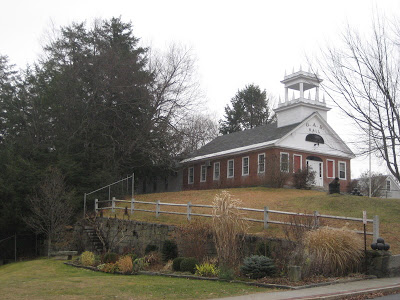 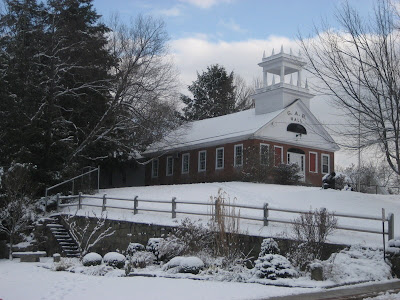 December, 2009
The Boccelli Garden is a public garden I designed in downtown Peterborough, NH. It is situated along a granite wall and is next door to the old GAR Hall, originally a Civil War veterans organization which found new life as a teen center. It was named in honor of Maria and Michael Boccelli who were Italian immigrants that lived in a house on the sight. The Boccellis had a boarding house during the depression and no person in need was ever denied a night's stay and a hot meal.
The Boccelli Garden is a mixed border, 16 feet deep and 60 feet long. When I designed the border in 2000, I consulted an article in White Flower Farm's magazine, The Gardener. The Gardener was a (sadly) short-lived periodical with drawings and no photographs or advertisements. The article was written by Fergus Garrett, Christopher Lloyd's head gardener at Great Dixter in East Sussex, England. It was titled Making a Mixed Border. It explained the process used to design the mixed border that Fergus and Christopher Lloyd were building for White Flower Farm in Litchfield, CT. It was modeled after the famous Long Border at Dixter. That article was an abbreviated precursor to Lloyd's book called Succession Planting for Year-round Pleasure, a must read for anyone planning a mixed border.
After reading Fergus' article, it became clear to me that the first design decision would be regarding the garden's appearance in winter. The composition and arrangement of plants should be attractive when there are no leaves or flowers. In other words, the garden needed to have good bones.
The initial anchor to the border was two antique granite posts at the front corners of the garden. The granite would make the garden feel like New Hampshire and their patina would bring a much needed feeling of maturity to the border. Next, I added five arborvitaes, Thuja 'Emerald Green'. I placed them in a group of three and a group of four in the back of the garden. I then added five Buxus 'Green Mountain' in the front of the border: a group of two on the side of three arborvitae family and a group of three in front of the arborvitae couple. That way, the dark color of the evergreens were evenly distributed in the winter picture. After several years, the arborvitae declined, due to lack of light, and were replaced with three upright yews, Taxus media 'hicksii'. They were planted in a pair and a loner. The boxwoods bulked up quickly and two were removed creating a group of three and a pair. Finally, I added a small Colorado blue spruce, Picea pungens 'Glauca Globosa'. The structure is easy to see in the February, April, November and December photographs above that my good friend, Susan Howard, took for me. They seem to disappear when the perennials begin the leaf out and eventually flower and become blowsy in the fall. I always like the boxwoods to be shorn into tight round balls. That way the fluff in the borders is contrasted and becomes accentuated.
Shrubs also add structure to the garden. The most successful shrub was the Aralia elata 'Aureovariegata' at the far end of the border. It is hard-to-find small tree that has unigue foliage and a muscular winter silhouette. It has been surprisingly happy in its site and has matured into an 8 foot specimen. Rosa rubrifolia, Hydrangea 'Pink Diamond' and the fruit of Viburnum sargentii 'Onondaga' add weight and interest to the winter picture.
Grasses are the final component to the bones of Boccelli Garden. Miscanthus floridulus 'Ginganteus' rises nearly 10 feet and is in the center rear of the border. Its smaller and variegated relative, Miscanthus 'sinensis Silver Shadow' anchors at the right rear corner of the garden. The foliage of the well-named Yucca filamentosa 'Gold Sword' is a feature year-round next the the miniature blue spruce. Finally, the arching blades of Hakenochloa macra 'Alba-striata' add an elegant punctuation to the front of the border.
The January thaw is a perfect time to examine your border and ask yourself if the picture looks interesting in the dead of the winter. Here, in New Hampshire, that is nearly half the life of the garden! Jot down some notes about what you might move or add right now. You will never be able to see those holes in the winter picture once the garden explodes next May.