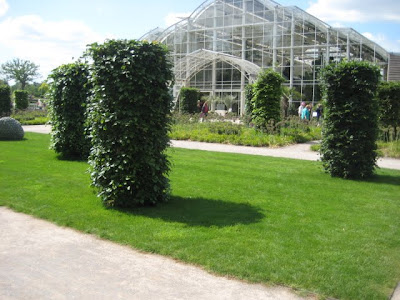 The Glasshouse Entrance with Beech Columns in Grass and Garden 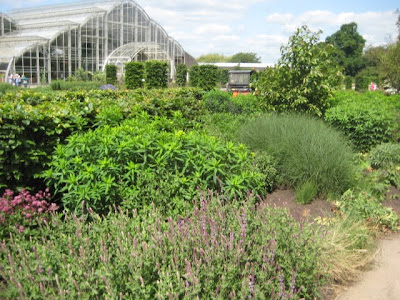 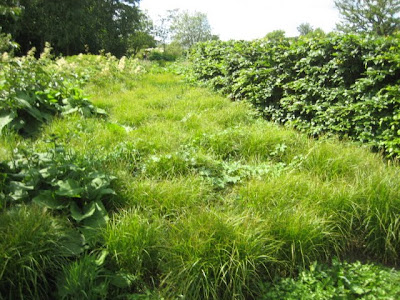 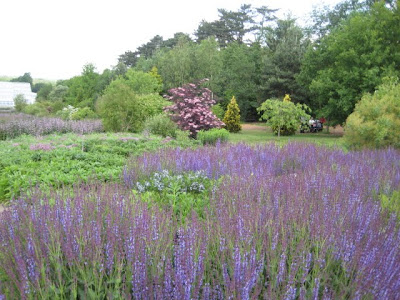 Glasshouse Border Designed by Piet Oudolf. Salvia in the Foreground and Sambucus nigra 'Gerda' in Flower Beyond. 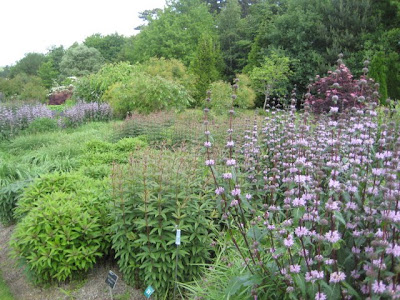 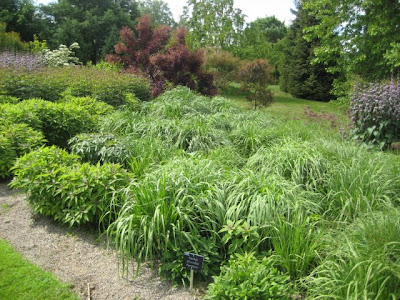 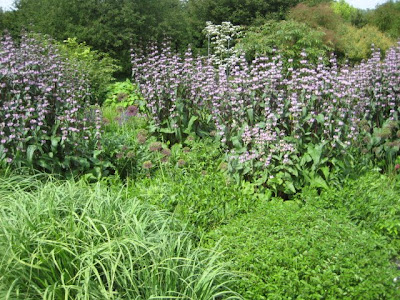 Calamagrostis brachytricha and Sanguisorba menziesii Provide Texture Before Bloom
The Best of English Gardens tour began yesterday with a visit to Wisley, the flagship garden of the RHS. A new glasshouse has been completed since I last visited in 2007. The Glasshouse Borders, designed by Piet Oudolf, had already been installed when I was last there. I was impressed at how the new gardens surrounding the glasshouse designed by English gardener Tom Stuart-Smith complimented and transitioned from the Oudolf borders so well.
The Glasshouse Borders are a pair of deep gardens that flank a central grass panel leading the visitor from the highest point at Wisley down to the new state-or-the-art glasshouse. The plant palette is typical of Oudolf and is planted in rivers that diagonally intersect the central grass panel. Pholmis tuberosa 'Amazone', Cotinus coggygria 'Royal Purple, Cornus kousa var. chinensis and Salvia x sylvestris 'Dear Anja' were the primary plants in bloom yesterday.
The new gardens designed by Stuart-Smith embrace a semicircular pool adjacent to the glasshouse. Near the entrance to the Glasshouse, he designed a series a rectangular panels of lawn and herbacous plantings punctuated by tall geometric beech columns. The beech theme is repeated in the low sweeping hedges that follow the curves of the paths and beds around the pool. The gardens are planted in interlocking drifts in a style very reminiscent of the Oudolf.
Tom Stuart-Smith's planting is a bold, yet simple, design that seamlessly transitions to the Glasshouse Borders and is an indicator, in my mind, of Stuart-Smith's respect for Oudolf and lack of ego.