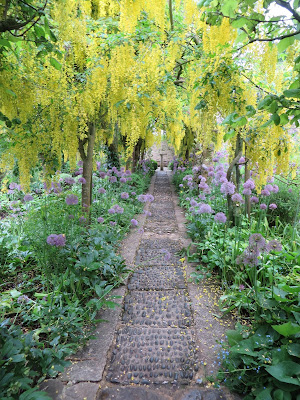 The Laburnum Walk at Barnsley House has been rehabilitated by the head gardener, Richard Gatenby. The picture above was taken while I was visiting in May 2014. During that trip, Richard told us that the iconic allee of laburnum and wisteria under-planted with alliums needed renovation and the best long-term solution was to remove the trees and begin again.
In April 2015, Richard removed the laburnums. On his blog, The Gardens at Barnsley House, he wrote "Cutting the Laburnums was upsetting; but it had to be done and I wanted to be the one wielding the blade, I didn't want contractors professionally and clinically laying it low. It was important that the gardeners of Barnsley House invested in the garden and did their bit for it's future; not only the routine important tasks of brush and dust pan, sowing and planting but the hard bit too."
I didn't visit Barnsley House last year, so I was delighted to see the progress of the Laburnum Walk which Richard hopes will mature to its earlier glory in 5 years time. The new metal arch was made by a blacksmith named Michael Clifford. Richard was pleased with the way Clifford removed the galvanized shine on the metal to create a weathered patina. The increased light revitalized the under-planting beneath the arches. I am confident Richard's five year goal will be achieved. 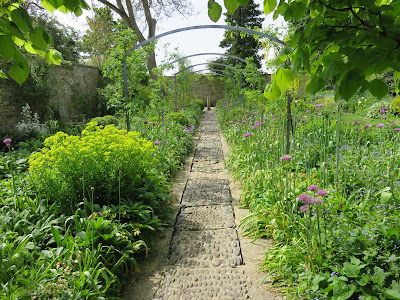 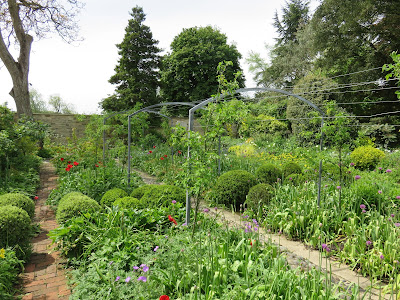 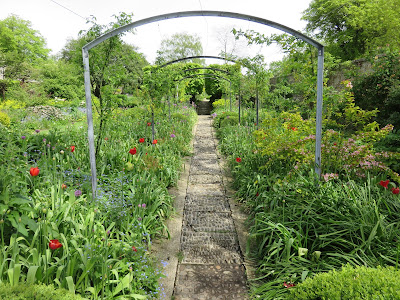